One of the most common confusions for student belts, and even many experienced Lean Six Sigma professionals, is the calculation of process capability using Sigma Level. Many will be familiar with a table like the one shown below, which shows the yield of a process for different process capabilities expressed in Sigma scores. 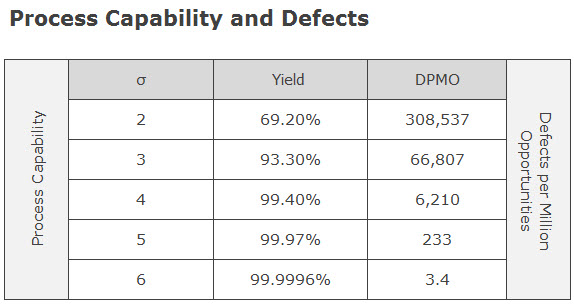 However, when they recall the properties of the normal distribution, they note that 99.73% of the data falls within 3 standard deviations of the mean (see graph below).

In other words, if you put a specification limit on a process at plus and minus 3 standard deviation from the mean, the yield would be 99.73% and the DPMO (defect rate) is 2700 – not 93.3% and 66,807 as stated in the table. So why is there a difference between what the table says and the standard deviation?

Well, 99.73% is the long-term process capability which would be observed if the process ran for a long time, and is the measure of whether the customer’s requirements are met. It is made use of in many LSS calculations; for example, the probability that a measurement on a control chart which falls outside the control limits (placed at +/- 3s) is special cause variation.

When we report process capability, we report what we can observe, which is the short-term capability. So, to achieve a long-term yield of 99.73% (3s), you need to fit 4.5s between the mean and each specification limit in the short term. That’s why the table shows 4.5s (how a process needs to behave in the short term) against a yield of 99.73% (what you will achieve in the long term).

Is the 1.5 sigma shift justified? Since the original work was done, LSS practitioners have concluded that the size of the sigma shift depends on the industry and type of process being studied; however, the general concept – that processes drift over time, and short-term capability needs to be better in order to ensure a long-term capability goal is achieved – remains valid everywhere.

About the Author: Jules Attard

Jules has been a Master Black Belt for over 15 years, specialising in chemicals and plastics. He uses his background to show how Lean Six Sigma can be used to achieve fantastic results for businesses in all industries.