Lean Six Sigma can be intimidating at first viewing. While Lean has many common sense aspects that most people feel comfortable with, the statistics in Six Sigma can give people flashbacks to double maths at school!

Unfortunately, that initial fear that Six Sigma is likely to be confusing is often compounded by the use of terminology you don’t hear in everyday life – terms like SIPOC, DMAIC and FMEA. However,

this challenging language and resistance to statistics masks the core, common sense and essential problem solving elements of Six Sigma.

The methodology is a great one, the roadmap is sound, but how do you overcome the feeling that people are overwhelmed with everything that’s being thrown at them?

One of the easiest and most effective things you can do is put it in a format your audience are familiar with, and simplify the language: This is exactly what Senior Consultant Mike Titchen did when the delegates from NHS East Surrey Clinical Commissioning Group were concerned by how they’d get to grips with Six Sigma.

“We delivered training for nine Green Belts and 15 Yellow Belts at the East Surrey CCG, but they were finding the data elements and jargon tough going,” Mike explained.

“We felt when we were receiving the training that it was just too much. Especially when we got to the statistics bit; it was a bit overwhelming and we couldn’t see how it would be readily applicable to the NHS.”

[the DMAIC roadmap] to the project management work that we already do here we were trying to […] make it more real for us. It helped us take the jargon out and put it into relevant terms for our staff.

“It will be useful for everyone absolutely knowing what they are supposed to be doing, when, how and where things get signed off, and what’s expected of them as they start their projects,” Catherine explained.

The new roadmap illustrates the DMAIC roadmap, and the associated milestones, alongside the activities that NHS East Surrey Clinical Commissioning Group would expect at each of those steps. It also indicates the tools to be used and the expected outputs at each step.

“I think the response so far has been positive. The head of transformation […] was on board straightaway and she could see the sense in it. The project managers felt that the statistics and full detailed roadmap didn’t really apply, but the training has given us tools such as options appraisal, elevator speech, different brainstorming ideas and gate reviews, which the project managers are keen to adapt to fit our organisation and use in future projects.”

The new roadmap takes away the intimidation that many people feel is inherent in Six Sigma to create a “fool’s guide” to running a project using the DMAIC framework. And if the new approach works for the NHS, it may be useful for others who may also be struggling to make sense of Lean Six Sigma.

Putting it into action

A few months later, having put the new roadmap into action and well on the way with a number of projects, Catherine explains that adapting the Lean Six Sigma structure to a process they’re already familiar with has given the team a sense of ownership.

“Now that we’ve had the roadmap developed and we’ve followed that up with some training and we’ve used real examples and given tools to support people, I think it’s made it more real for us. We can understand what each of the process steps means for us as an organisation and as project managers.”

And Catherine added that there’s no substitute for getting to work and applying the rules and structures to real-life.

“I think just having the training itself doesn’t make it real until you start to embed it and say ‘whatdoes that mean for us?’.” 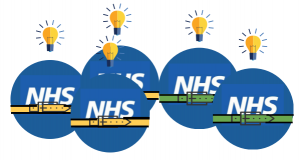 While it’s still early days and the first projects have not yet reached completion, Catherine is confident that they’re on track and that the Clinical Commissioning Group will see some savings.

“It’s too early to say that we’ve seen real success,” she said, “however the project plans are on schedule for the majority of projects and the road map has been used to set these projects up from conception to implementation and monitoring.”

Creating a roadmap to make Lean Six Sigma more accessible to the team has encouraged people to get more engaged, and Catherine says it’s an approach that she would recommend for other NHS bodies and public sector departments. She added that while the project management team are trained in PRINCE2 and other project management approaches, they have found the Lean Six Sigma structure the most effective for an NHS culture.

“I would [recommend it] because it’s very clear and methodical, and you know why you’re doing each step so it makes sense. I think it flows and fits a lot easier with the way the NHS is. I would pick this over PRINCE2 any day.”

Catherine and the project management team, together with Mike, are still making tweaks to their own personalised DMAIC roadmap and are positive about the future.

“We’re not following it exactly as we learned at the Lean Six Sigma course,” she said, “[but] overall, it remains an effective process.”