On the 23rd of June 2016, the British public will cast their votes by selecting one simple answer for a not so simple question: Should the UK remain in the EU or vote to leave? This once in a generation EU referendum has left around 11% of voters struggling to come to a conclusion. This is hardly surprising, with warnings from the Stay campaign of an uncertain future for Britain away from the EU, met with accusations of scaremongering shouted from camp Brexit.

But, there is one cry from the public that can be heard above the arguments, and that is, “We want the facts!”

An internal government poll has suggested that 85% of the public feel that they need more facts in order to make an informed decision. The government has responded with their controversially Tax funded leaflet, heavily criticised for providing very few figures and riddled with words such as ‘risks’ and ‘uncertainty’. The Brexit campaign’s offering of facts has come in the form of financial figures such as the £13.5 Billion paid to the EU last year, of which Britain received £4.5 billion in return; a figure that has been criticised as neglecting to present the non-financial benefits of this payment. 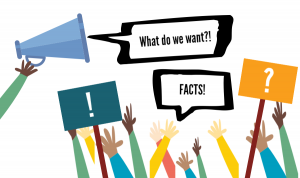 We don’t need to apply our expertise and years of experience in change management to know that both sides’ facts are not satisfactory. Fear of change is not enough to rely on when encouraging others to oppose it, and presenting half the facts in a bid to gain support will almost always be foiled as propaganda.

When making an argument for or against change, facts are essential. As William Edwards Deming said, “Without data, you’re just another person with an opinion.” And whether in a business boardroom or on a political podium, opinions are not enough to unite support.

“Without data, you’re just another person with an opinion.” W E Deming

The dangers of deceptive data

All too often in our work as Business Improvement experts, we come across companies stunted by a fear of change due to a lack of facts. Equally, we’ve had to help businesses rebuild bridges with employees after they’ve enforced unsuccessful change on the basis of manipulated data. Decades of experience has confirmed to us the importance of understanding and clearly communicating data before i 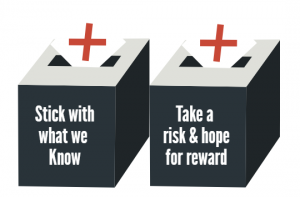 Of Course, any major change poses uncertainties, but the choice should never be between taking a risk in hope of reward, or playing it safe and sticking with what you know. Data allows us to make informed and empowered decisions, and this is all the public are asking for.

With just over a month to go before the votes are cast, impartial websites, articles, and books have arisen just in time to answer this desperate plea for unbiased facts. For example, BBC News’ Reality Check: The EU referendum provides the much needed simple answers that separate facts from fiction. Perhaps such impartial information will finally shake up the poll results that have remained almost evenly split for several years.

Whether you have found the facts to make a confident decision, or you are still drowning in the dataless debates, the referendum campaign has highlighted one certainty: The unbreakable bond between decision-making and data. If you’re an SME looking to expand, an international company considering a restructure, or even a country deciding to leave a union, the decision to make a change must always be preceded by openly communicated and unambiguous facts.

If you need help making the right changes for your company, get in touch with us on 0800 066 3749 or click the button below.